This is one wildly off-topic article. I’ve always sucked at FPS games. I played some when I was around 14 years old, but never managed to feel comfortable. A few years ago, I tried again when Halo 5 came out and got my ass kicked. At that point, I felt it was never going to happen.

As I still enjoy the Halo franchise, I gave it another try when Halo Infinite came out a few months ago. And as the campaign was unavailable at launch, I set my mind to finally understand why I sucked at FPS and become, maybe not a champion as the title of the article says, but at least good. This article is my findings and lessons learned. It offers solutions for people like me with poor reflexes and lack of training by compensating with strategy.

This article broadly applies to other FPS games, but Halo is great for the purpose as it has a long time to kill: You’ll need multiple rounds in the enemy instead of one well-placed shot. This design diminishes the importance of having the best reflexes.

The cardinal idea: Always fight with an advantage

Why would you start a fight with no obvious advantage (or worse, disadvantaged!)? Continually, ask yourself if what you are doing is putting you at an advantage for your upcoming fight. You shouldn’t complain when somebody backslaps you by surprise… you should be that guy!

Let’s now see what those advantages can be.

Let’s start with a clip:

Being on the high ground allows you to notice enemies traveling across the map while they can’t notice you. Maintaining this position will prevent enemies from moving freely across the field.

As we see at the very end of the clip, we also have a great position to stop fighting. If I’m about to lose the engagement, I can retreat right away. On the other hand, the enemies on the low ground will struggle to flee and I can easily decide to go down and finish them.

Finally, it is a lot harder for enemies to hit you in that position due to the size of the respective hitboxes. Indeed, hitboxes depend on position: On the high ground, you can fully see the enemy while they might only see your head—tilting the fight to your advantage. 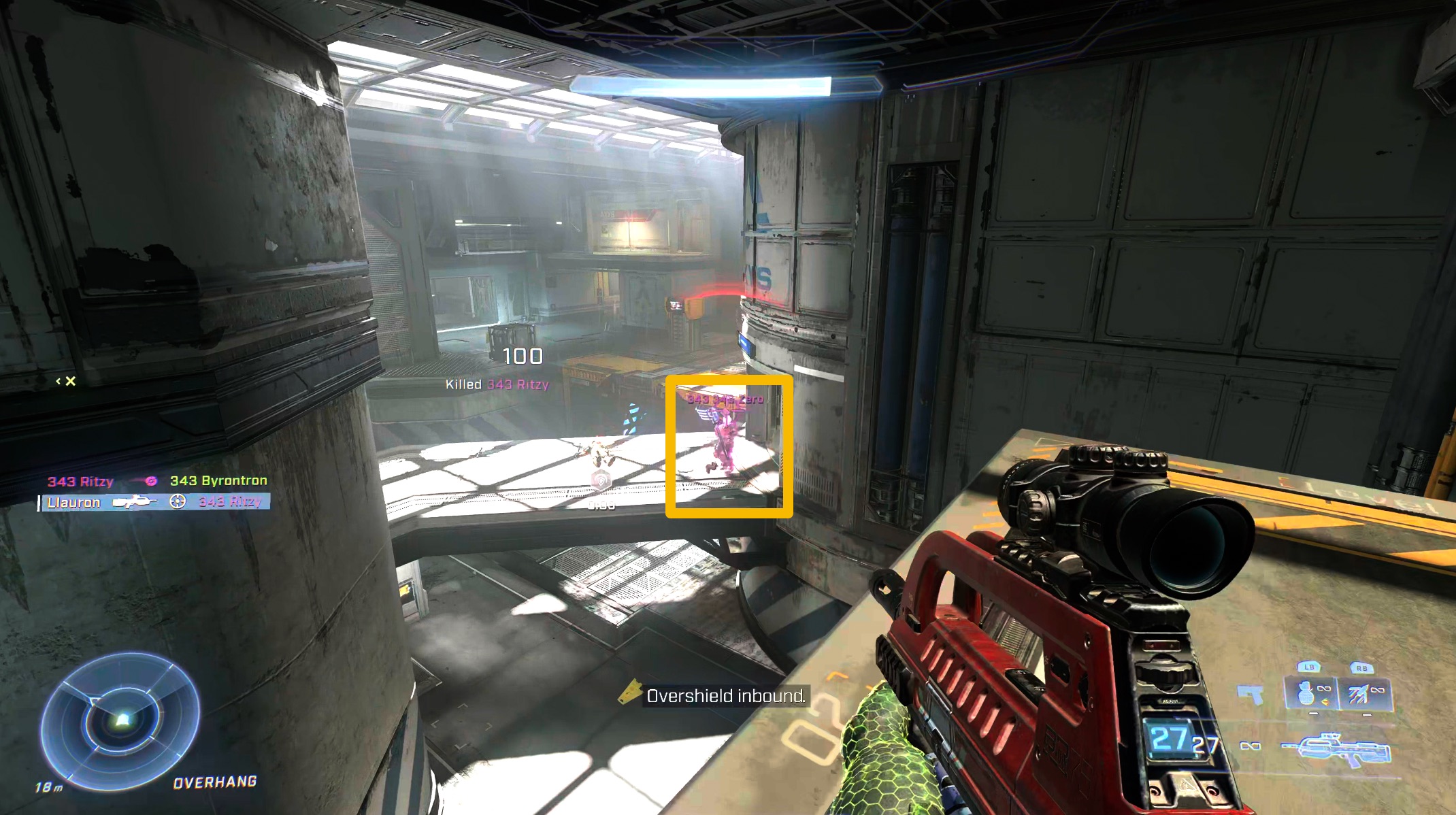 From the high ground, you can easily see the entire opponent’s body. 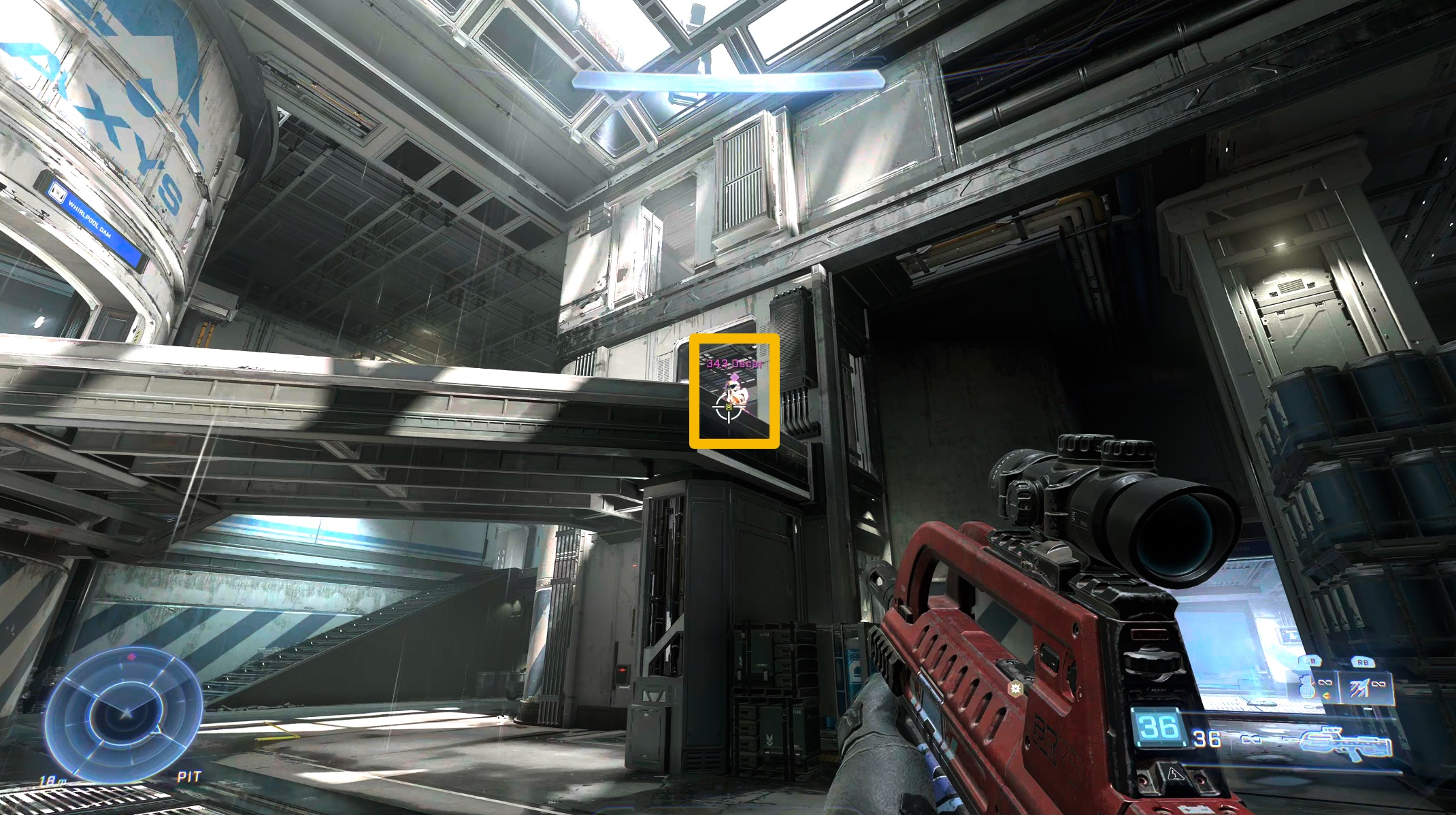 From the low ground, the hitbox is a lot harder to hit.

As you get used to the various maps, you’ll start understanding where enemies will likely come from. Use this information to your advantage: You should always be pre-aiming, meaning your cursor is at all times where the enemy is the most likely to be. This saves you precious time to be the first to engage.

You can even go one step above and sometimes fire before you even see an enemy. It won’t always work, but you have a lot of ammunition available, and it’s almost impossible to run out. So take a chance: Putting a few bullets in an enemy won’t take him down, but you’re slowing down his progress and applying valuable pressure to the enemy team.

Fighting for equipment, weapons, and grenades

Everything that you can pick up on the map is an advantage. Some are more obvious than others: Everyone knows that picking up the rocket launcher is a good idea, but most ignore grenades or equipment.

First, let highlight that you should always fight for those high-value weapons and equipment. Too often, players just forget about them.

It gets interesting with all the things most players ignore: Average secondary weapons, more grenades, etc. This is a big mistake: It doesn’t take a lot to win or lose a fight. Any slight advantage can help. For example, if you pick up grenades and get four of them instead of two, you can easily surprise enemies that believe you’re out. Or could you send a hail-marry and get lucky.

A corollary of picking up this stuff is that you should keep track of it: If you die fully loaded, that’s a complete waste. Notice if you tend to die without having used everything. If you do, force yourself to use it, even if it feels wasted.

Here’s a short clip of what happens when you pick up equipment. For reference, in Halo, the Repulsor is an equipment that most players don’t actively pick up as pushing people away feels useless. However, with map knowledge, you can get some great results:

At all times, you can know where your team is, if they are in an engagement and if they just died. Coupled with the kill-feed (the feed showing who has been killed), you can broadly keep track of who’s alive on the field and where they are.

This information allows you to decide where to push: You’ll be able to pick off weak enemies that just downed a teammate and avoid running in the full enemy team.

You’ll also be able to tell where dead enemies will respawn. The game will put as farthest as possible from harm. Usually, it narrows the number of options and gives you the ability to reposition (again, as to start the next fight with an advantage). 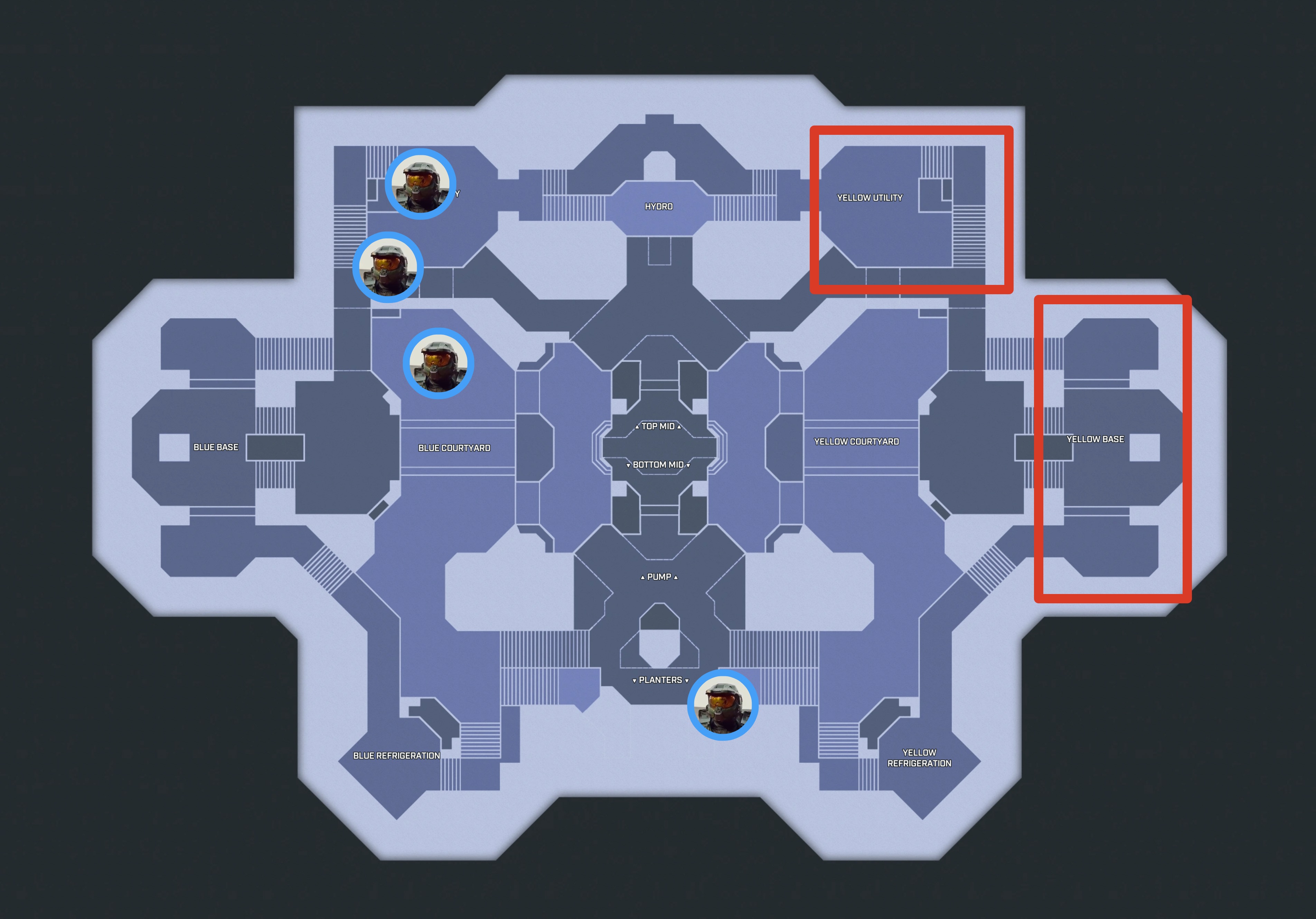 With all enemies out, its a certainty they will respawn in one of the areas in red (thanks to mapgenie.io for the map).

Buddy up and play for your team

A coordinated team will slaughter the uncoordinated one. Try staying with others in your team. Winning two 2v1 is a lot easier than surviving a 1v1. You also want to abuse the ping feature to help your teammates understand where the enemies are and when power weapons are about to be available, etc.

Something I’ve found is beneficial is to spray enemies with bullets even if they are too far away for you to be able to kill them. You’ll be forcing someone to slow down while their shields rebuild. However, their team will continue pushing, but at a numerical disadvantage.

As part of playing for your team, also understand that you aren’t helping if you sacrifice yourself needlessly for the objective. I too often see players rush to take the flag only to die a few seconds later, unaware they were surrounded. Take your time. Understand where enemies are and move on to the objective when appropriate.

Understand how to move

This is a very game-specific recommendation, although this might apply to other games as well. In Halo Infinite, you can slide on the ground after a jump by pressing the crouch button at the right time. This is nice, but there’s more: If you run, drop off from a short height, and press crouch at the right time, you can make an amazing fast and long slide:

Each game has their own tricks. Learn them!

Getting a better controller

The problem with the Xbox (and PlayStation) controller is you can’t have your thumbs on the sticks and press the buttons at the same time (unless you use the pretty ridiculous “claw” technique). Thankfully, Xbox released the Elite controller with buttons on its back. It is instrumental in performing actions while maintaining total mobility. 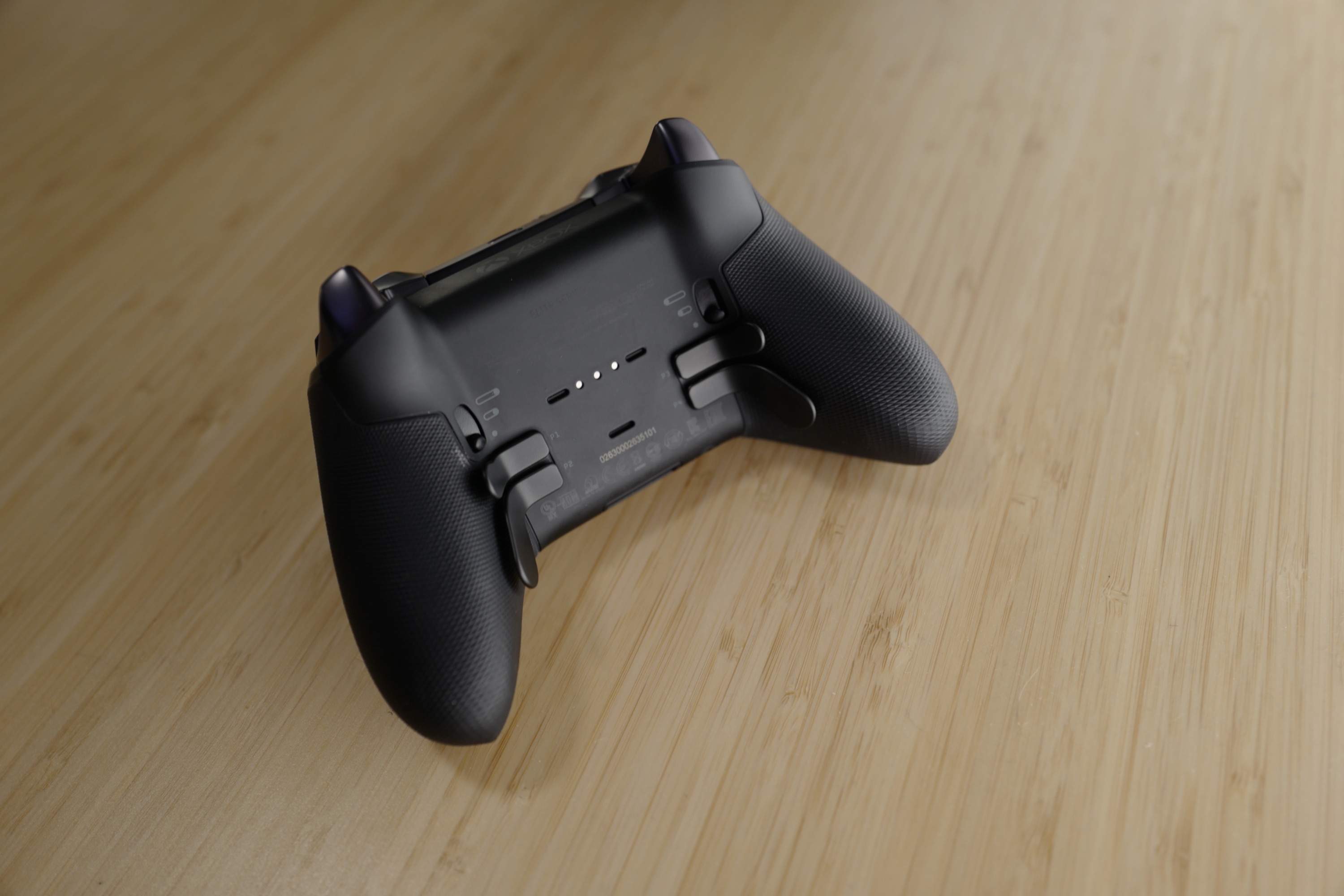 Notice the four buttons. You can even set the trigger length!

Have the right mindset

FPS games can be intense and, at times, incredibly frustrating. I used to swear a lot while playing, but I’m glad I’ve changed this. Games should be fun to play, especially if you want to improve.

What changed my mind is reconsidering why I’m frustrated: Even when messing everything up and dying needlessly, anger isn’t helping. You’re better off reflecting on what happened: Was your position correct? Was your strategy sensible? Let’s say your aim was poor: It is a consequence of a lack of practice. Anger won’t change anything, but committing to more aim training will.

Ensure you always take full ownership of what happens in the game. If everybody in your team dies, don’t blame the noob. Ask what more you could have done. This proactive thinking leads to growth while blaming others leads to nothing.

When you think about it, the only constant in all of your games is you! Everyone deals with bugs, bad teammates, and so on. The quicker your take complete ownership, the faster you’ll improve and make a difference. 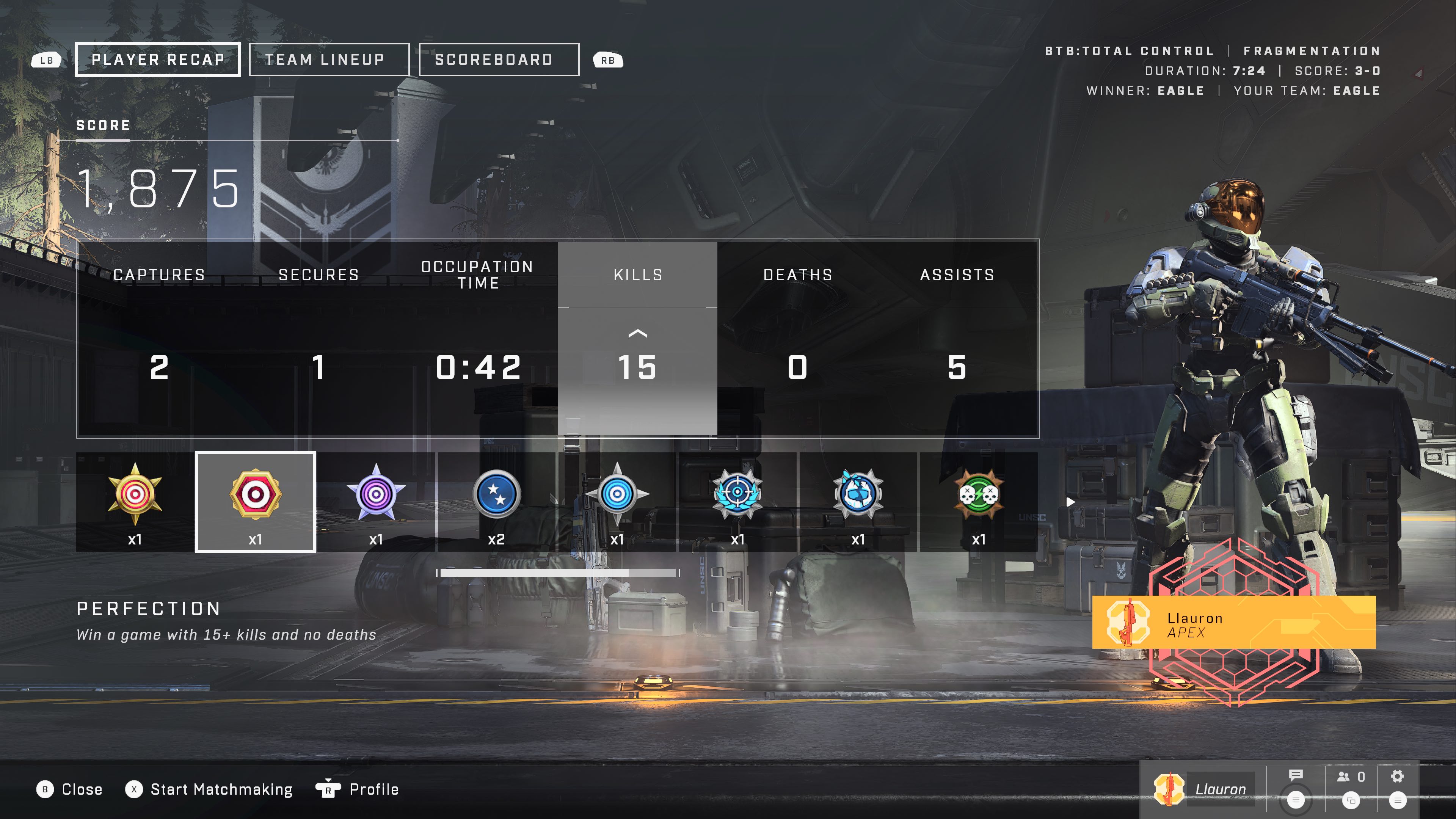 The result of a short but sweet match.